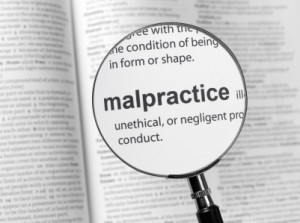 One of the most dangerous forms of cancer misdiagnosis occurs when a medical professional fails to properly diagnose cancer that has developed within a patient. When this type of cancer misdiagnosis occurs, the condition may remain untreated for extended periods. Cancer treatment is generally more effective the earlier treatment begins. As a result, the patient may experience deadly progression of the cancer.

Diagnosing another Condition as Cancer

A patient may be given a cancer diagnosis despite the fact that cancer is not present. This can be caused by misdiagnosis of symptoms that a patient experiences. This type of cancer misdiagnosis can also be life-threatening. Unnecessary cancer treatment such as chemotherapy and surgery may create additional health problems for the patient. Additionally, the patient’s actual medical condition typically remains untreated. Depending on the severity of the condition, additional complications and death may result.

Cancer misdiagnosis may occur due to a number of reasons, including:

Patients may play a crucial role in preventing cancer misdiagnosis. Those who are under physician care should always be honest about their symptoms, regardless of how trivial or irrelevant they may seem. One small, overlooked symptom may be the difference between cancer misdiagnosis and successful diagnosis and treatment. After discussing symptoms, patients should not allow physicians to brush off or ignore the potential severity of symptoms.

Patients should ask as many questions as needed to understand their current medical condition. It is often considered a “red flag” if a physician cannot answer a question regarding a patient’s health. In cases such as this, it is recommended that the patient seeks examination from another physician. Evaluation from additional physicians may be helpful in any case. The more professional opinions a patient receives, the more likely it is that any medical conditions will be properly diagnosed and treated.

Twenty-two-year-old Jennifer Rufer was diagnosed with a rare and aggressive cancerous tumor in her uterus. After months of chemotherapy, she received a hysterectomy. After losing the ability to have children, doctors discovered that she never had cancer. She received $16 million from her medical malpractice suit against the treating hospital and the company that manufactured the faulty test that led to her cancer misdiagnosis.

Herlinda Garcia of Texas was diagnosed with stage four breast cancer, despite the fact that she did not have cancer. She underwent four months of chemotherapy and gave away her possessions under the impression that the cancer would result in her death. She received $367,500 as a result of her medical malpractice lawsuit.